Special Note:  As the UN Conference on Climate Change (Cop27) nears, this will be the first time in several years that King Charles III (Formerly Prince Charles) will NOT be in attendance.  A strong advocate of climate change remediation, the rumor is that he has been asked by new Prime Minister Liz Truss to keep a low profiled.

The key to shifting the climate change discussion to something realistic has always been to debunk the popular belief that scientists of a hundred and fifty years ago proved that carbon dioxide warmed up the planet.  The main scientist, John Tyndall, resided in both Ireland and London.  Loyalty runs deep in the UK but perhaps through the new Ms. Truss the British will look a bit harder at the facts and not believe in climate change on national loyalty alone.

From a writer's perspective, the unpredictable audience of the internet makes it very difficult to feel that these words will be used appropriately.  You hope, if you have readers at all, that they  can understand the technical concepts explained here. You hope the information will start a discussion not a feud. But there is always worry about the lack of integrity in the climate change industry and the leaders who support it. 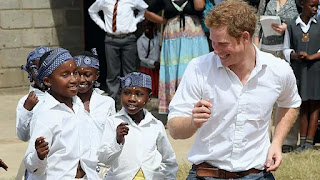 Today, it might be Prince Harry who was the victim of climate change politics. Yet again, leaders like United Nations Secretary General António Guterres are not above using a well connected young man to promote a scientifically flawed position that cannot be justified by spreadsheets and computer data. (See speech here)  Sadly, the United Nations would rather hold on to 50 years of poor judgement than do what is best for the global environment and economy.  Here's where this blog may have come into the picture.

What Brits Should Know About Climate Change

A few weeks ago, during a particularly hot Royal Ascot, the article  What Brits Should Have Always Known: John Tyndall Knew Nothing about Climate appeared on this platform. (see original here)  The reason was start a discussion about whether John Tyndall was really a man who understood climate nor one who simple carried out several experiments which would later be mostly countermanded.  He did, however, explain the insulated properties of clouds quite perfectly.  Modern science just turned it into something else.

As a quick summary, the conclusion was that a history based difference in language caused young computers to link Tyndall and climate change.  The well-respected professor never studied climate or even considered it because the study had not been established until just before his death.

Where do the Royals Come In?

Understanding that the USA and UN were locked into its illogical position of carbon-based gas theory, the article challenged Prince Charles and the Royal family to take a more political stand in helping the World understand differences in terms and how they can be destructive when misinterpreted by computers.

Apparently, it was Prince Harry that was feed a diet of misinformation and then put on display for the World to see.  It doesn't seem to have gotten the desired response. If this blog was in any way used to encourage that, I am truly sorry.

Manipulating data is a common occurrence for leaders. As this blog has stated before, all climate scientists have to do is prove their point without a computer and the world will listen.  Guilt, shame, fear and emotion are not the tools of real science.

Posted by Sarah Schrumpf-Deacon at 10:46 AM