The Age of Reality: Looking Back at the Future

The Age of Reality: Looking Back at the Future (

(Note to Readers: This was written in October 2015 as a contest entry on the subject of where would the United States be in 100 Years. It was written before Donald Trump announced his candidacy for President in 2016. Needless to say it was not published as a contest winning entry) 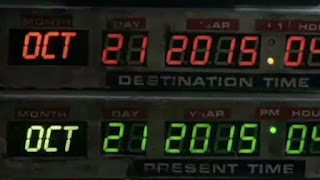 It is October 21, 2015, “Back to the Future Day” in popular culture.  Newscasters and fans alike are creating commentary about what the popular movie series predicted correctly and what it got wrong. Only 30 years after its debut in the mid 1980s, the movie was remarkably correct.  In the same way, it may be time to reflect on where the 21st Century  will take the world. Certainly the first 15 years have seen little more than difficulties. It has been a time of political disruptions, economic downturns and catastrophic natural disasters.  No part of the world seems to be without conflict.  The icecaps are melting from global warming, Third World countries as well as modern cultures complain about the lack of quality health care.  Large scale economic and military agreements between major powers are brought down by passionate and highly motivated grassroots organizations.  It is not looking good for the next hundred years.

Imagine then that it is possible to jump into the outdated DeLorean with a now aging Marty McFly headed to October 21, 2115.  It is not a relative he is seeking but a sense of what has happened in the 21st Century.  He is worried about where the human race is headed.  Will there be WWlll, a cure for cancer, space travel or just a long, unending period of worry, self-protection and discord?  What characteristics will define the time period?  What insights will he be able to offer to the people of the world upon his return?  Ride shotgun on this trip to find the answer to these questions and more.

The doors close. The motor starts to hum. Lights begin blinking and gauges move as the DeLorean bumps through the years.  Suddenly, it comes to a halt with a strong thud.  The motor quiets and the lights and gauges settle into a flat position. The doors to the time machine open and the world is in clear view. It has been one hundred years since the first “Back to the Future Day” and there is trepidation as one looks out of the open door.  Marty exits the machine and takes a look around.  There are people gathering around - even now recognizing the iconic body style and doors.

As Marty lets out a breath that he didn’t realize he was holding, there is recognition.  Fashions are slightly different but much the same as the comfortable but practical style which had been adopted for nearly 40 years.  The neighborhood has the same homes but each shows signs of modernization and is complimented by mature landscaping.  Cars still operate in much the same traffic pattern as they did, roads and wheels have, after all, been around for thousands of years.  The time of Star Wars and the Jetsons has not yet arrived.  Music still sounds like music, children still play and people still are attracted to a strange vehicle that suddenly appears where one did not previously exist.

But the world is different.  Unlike the passion for new and need for change that characterized the 20th Century, there has been an overriding need for the truth based on facts and science not moral premise or majority vote.  Real truth has become the goal in the major areas of health care, environmental protection, economic policy and finally global politics. The Age of Reality has come to the world and with it a sense of peace and well being that has not been seen in hundreds of years.

In the year 2115, people are remarkably healthy.  Universal health care is a given - much like police presence and fire and rescue services. And yet, it does not resemble the specialized and competitive health care system that existed.  After a long period of costly and often, contradictory treatments, patients became disillusioned with treatment for symptoms instead of cures.  They began researching their own symptoms and challenging the concept of specialized medicine. Doctors were forced to include the patient's perceptions and knowledge as part of diagnostics.  General practitioners, particular those with the skills of Dr. House, rose to prominence leading teams of specialists who have taken on more of a role of assistant. Team medicine became the norm for every patient instead of just for major illnesses.  Patients no longer sit for hours each month waiting to see separate doctors in separate offices and are treated in a holistic manner.  Real health is preferred to that which is controlled by artificial means such as drugs or repetitive procedures.  Health professionals have been forced to admit that the practices which kept the human race going for thousands of years have far more value for longevity than originally thought.  Foods and vitamins are acknowledged to impact health in similar ways as prescription drugs.  Corrective measures such as glasses have all but disappeared with the use of new but non-invasive measures.  Technology puts an end difficulties of those with hearing impairments and damaged limbs.

As health care changed so did farming and production of all manner of goods and services. Environmental concerns became as important as a trip to the gym.  The USA revamped its laws and worked with other nations to find common ground in exploring more natural methods of energy use and food production. What is eaten is no longer determine by marketing whims and company profits. Data used in claims of health benefits now requires up-to-date testing not supposition.  Global standards for food production and energy use have been put into place and have made great strides in addressing worldwide hunger.  Conservation of energy has been the push causing a gradual reduction in use of fossil fuels. Solar power has become more viable and passive energy collection powers most homes.  People have adopted the Old World traditions of family meals, home-cooked dishes, and a healthy relationship with both food and others. And as people start talking around the dinner table, there emerged a sense of consensus that has not been seen in decades.

In 2015, the United States was a country of power and influence but without a clear identity.  It was born in revolution, came of age a hundred years later during a teenage-like rebellion within its borders and then settled into its growth and identity as world leader and protector during its next hundred years.  But as the 21st Century began, it found itself in a new position. It was now a target for the underdog countries wishing to make their mark. Instead of rash patriotism and dedication to its principles, America responded like a prized fighter who had reached his prime and was struggling to hang on. Its people were divided into two equally strong camps without the strength to sway the other side.  The status quo was not necessarily a choice but something that existed because making a firm decision seemed an impossible task.  It was becoming more like the older countries of the world - those that had lost their dominance years before and relied on agreements between neighbors to maintain their positions.  America was getting old. There was too much to risk to take chances and it was slowly, ever so slowly losing its influence.  With its age, America was also become wise and was now able to work to benefit its population not its status at the lunch table.

And so with people enjoying health and taking the time to build relationships, America realized that its future, and the future of its diverse population, depended on cooperation. This is not just a policy for military peace but a level of cooperation that transcends economic, religious and territorial boundaries.  The people of the world gradually move into the Age of Aquarius as the baby boomers who protested so strongly for it, are leaving the earth much like Moses fails to enter the promised land.

What is left is a world in which individual rights are not trampled by the good of all. Cars drive themselves so that individuals can read, sleep or revive a lost art while commuting to work.  People enjoy a shorter work week and higher working wage so that they can focus on their health, live comfortably and support leisure activities of all kinds. As families spend more time together and health improves, mental illness declines. With declines in mental illness so follows the incidence of violence. The World is enjoying a sense of safety and calm that resonates in a new time of learning.  Life has become real again and it is good.

In the last half of the century, the world has experienced a rebirth.  Love of the arts is supported again by common folk who enjoy concerts, reading an original copy of Harry Potter, now only available at the local museum, and creating art without the aid of a computer.  Travel has become easy with the adoption of global passports.  One can travel the world much like one buys a subway or bus pass now.  Education has become an individual focus with functional skills being mandated but interest, aptitude and employment driving specialized education.  Online curriculum delivery has now replaced the social aspects of college and high school rivalries.  There is time to make a good living and have a good life.  There is no working poor and a universal retirement program that offers more than bare existence.

It is a good impression that Marty McFly will take with him as he returns to the DeLorean to begin the journey home to 2015.  Certainly, the last 100 years were not perfect.  Mother Nature took its toll when needed to keep the environment healthy. Earthquakes, tornadoes, blizzards and hurricanes have not been erased.  Crime and war are not gone either.  It would be foolish to expect all people to operate by the same rules. However, diplomacy and etiquette have returned to the political stage.  With a greater sense of decorum, the attraction of self-preservation such as gun-toting and military defense have become unnecessary traditions.  Violence still happens and will continue to do so as long as man walks the earth but for this brief period of time, there is the closest thing to Peace on Earth that any religion can hope for.

Marty takes his impressions and climbs back in the DeLorean.  He is pleased with The Age of Reality and hopeful that the world will be able to maintain what it has accomplished.  Cooperation and compromise have succeeding in a way that defense and demands have not.  The doors close.  The vehicle disappears once again and returns to 2015.  Will Marty tell of all that he found?  Will he nudge people into the future he has seen or will he simply wait to see what happens?  Will the Age of Reality become a reality? Only time will tell.

Special Note:  Several of the predictions here can be backed up by current conjecture.  Those items can be cited if needed but according to the guidelines print with contest materials readability was more important that research and justification.  I would be happy to cite any point if needed for publication.

Posted by Sarah Schrumpf-Deacon at 10:20 AM No comments: