Update: It has been three years since this post was written. The pandemic changed our retirement plans considerably. Perhaps it is time create the next installment "Surviving Early Retirement".  :) 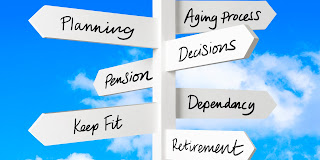 It was a normal afternoon in mid-July and the phone rang. Like usual, I ignored it expecting for my husband to be calling and telling me that he was working late - sigh - AGAIN!.  The company for which he works has used the generous tax break awarded to them in the last few days of 2017, to go on a massive upgrade of equipment and infrastructure, most of which the maintenance crew must install. My husband is a senior (translation: oldest) member and tends to be the equipment whisperer, often sticking with a project long after quitting time.  It had become commonplace for him to work 6 days a week and a minimum of 50 hours. But this phone call was something totally different.

"They are taking me to the emergency room. I have been in an accident," squeaked the voice into the answering machine. I could tell from the high pitch and rapid words coming from my normally stoic husband that this was more than just a precautionary measure.

"What! Wait a minute. What happened?" I countered as I picked up the receiver to ask a million questions.  Yes, they were on their way to the emergency room and it was only his little finger but there had been lots of blood and they couldn't tell what the damage was.

Six hours and two emergency rooms later, the old boy came home with this tiny bandage and a couple of prescriptions. What was going on here?  The last time he had been injured on the job his whole right hand had been scratched and chewed like a piece of old meat.  What was the deal?

Two days later when the orthopedist examined him we realized this was not going to be a go-back-to-work-in-a-few-days situation  This was going to be a six week practice run for retirement - an experiment of sorts to see what it was going to be like for a man who had worked since he was 16 years old and had answered to someone else's authority for most of those 40 plus years.  All I could do was laugh although you could tell he was not so thrilled about the prospect of staying home with me for that period of time.

A year earlier, I had left teaching on sick leave in the middle of the year and not returned.  It had been a rough transition for me and I expected it to be an even rougher one for him. So, we are taking this opportunity to pass on some advice to those who may find themselves looking at retirement in a few years and not sure how to approach it.

1. Expect to Grieve A Little

While I had my "honey-do" listed primed and ready, my husband's reaction was something more than embracing a chance to do all those things we never seemed to have time for. My husband was lost.  Time off before had been a chance to rest, relax and do what he wanted to do.  Now there was no routine, too much sleep, endless television and the reality that this could be a couple of decades of endless 'freedom'. That became a scary event.  He missed his co-workers. He missed the solitude of the drive to and from work, He missed the hard work and someone needing his expertise.  He had lost something important and for a few days he just thought about that lost and how it could impact his future.  I realized myself a year before that it while I was relieved on one hand, there was a hole in my life. It takes time to fill that space but giving yourself time to do so will make the rest of retirement much happier.

2.  Make Budget Adjustments Prior to Retirement

Regardless of how well you plan for retirement, there will be a shift in how your budget works. If you have been a household of weekly paychecks like ours, suddenly going to monthly benefit checks can be an upheaval.  Even for our short practice session, payments had to be changed. my suggestion is to pay bills ahead to give your budget a chance to ease into the change.  Ideally, you have reduced or paid off all debt but sometimes that isn't possible. Keep your future budget in mind as you consider any large purchases and refinance options. Remember - just because the bank says it is a good idea, doesn't mean it will be right for your future self.  Retirement income does not generally increase over time and even good planning can't keep unexpected events from happening. Be cautious.

Like many people our age, we have been planning and talking about retirement for what seems like forever.  We have talked about traveling. We have talked about health issues, We have certainly talked about money and we have talked about ways to fill the gaps that will certainly be there.  Both my husband and I are/were happy in our jobs.  We liked working.  Without that structure in our lives, neither one of us does well. Somewhere about week three of this trial retirement, I realized that retirement could not be that much different than work life for my husband.  It was then that we put some of his work habits into practice at home.  After 40+ years of living with the same type of routine, the chances of us ever doing anything different just increases our chances of being frustrated and unhappy. Yes, we will travel.  Yes we will work less and spend more time reading, talking to friends and experiencing life.  It just isn't going to all be fun.  After all, fun isn't fun if it happens every day.

My husband is happily back to work these days. He is a little slower than before his time-off and his hand is still a bit tender but he is back to normal.  I recently asked him if he had learned anything about possible retirement in a year or so.  He looked off into space and said, "Maybe".

Personally, I am glad for the sudden long-term absence my husband has experienced.  Those few weeks gave both of us a perspective that neither of us would have had otherwise.  I hope it means that when the time comes, real retirement will be an easy and welcome transition and not a source of concern.  As my husband said, "Maybe".

Posted by Sarah Schrumpf-Deacon at 1:10 PM No comments: