UPDATED: One Hot Mess: Why Saving the Planet is Making it Hotter? (A FACS Teacher Explains)

**** NOAA (our country's national weather reporting agency) has recently released yet another hyped up global warming article that is equally short on details.  Claiming that this July is the third hottest on record anyone who is familiar with computer data understands the questionable accuracy of such a statement.  As mentioned many times before in this blog, there is no standardized method of reporting temperatures and the chance of human error in such reporting methods is high. Just failing to report temperatures from Montana or Alaska in a timely fashion could shift numbers to seeming much hotter than they actually are.  Add the preference for hotter, urban areas and the only way to describe such information is "skewed".  With a climate change bill waiting to be voted on this week in the House, it is not surprising that this agency would  slant information to tip the votes in favor of passage.  Remember: this climate change bill is not about reversing human caused climate change but designed to fund infrastructure which will only make the planet hotter and our tempers more frazzled.

*** Biden’s one billion trees is more about supporting the housing industry than climate change. Wood fired power plants produce the same type of smoke as coal and oil. This is called gaslighting the public.

We have all done it.

You open up a cookbook, Do-It-Yourself manual or set of instructions for your child's new toy and follow them to the letter.  DISASTER!

Not to be undone, you try again. You follow the steps exactly, assemble your equipment before starting, have all the right materials and it seems to be going well. . . except the end result isn't anything like what it is supposed to be. Welcome to Climate Change Politics.

Now you know where leaders and climate scientists find themselves today--following all the rules and coming up with a crisis that is "one hot mess".

As a teacher of any subject will tell you, thinking for yourself is a very difficult concept to instill in even the smartest individual. Forty years of computer generated directions and automatic answers has indoctrinated civilized people to question everything BUT the directions.  The reality of any science is that the science doesn't change, only our understanding of it.

The question today is . . .How bad is it going to get before these educated thinkers rely on their brains rather than their computers for answers?

As Biden tries to pull a climate change 'win' out of thin air, the problem isn't his leadership style or focus.  The problem is the THIN AIR. Biden simply isn't speaking Nature's language and until he does it is only going to get hotter.

Until modern science decided Nature could be modified without repercussions, Nature's rules were pretty basic and easy to understand. As for air quality, there  was but one concept to remember. Plants clean the air and animals/humans dirtied it up.

Why in the world would that be part of a Family and Consumer Science background? Because before whole house filtration systems most females from homemaker to high end interior designer knew growing plants kept rooms smelling fresh without extensive cleaning and artificial deodorizers. Pretty smart, huh?

So what does that have to do with today's climate change problem?  It's simple. Humans cleaned up the air instead of letting plants do it. The chain of command for Nature was broken and not there are consequences that went something like this.

All this because humans thought they could do it better than Mother Nature.

President Biden, Mother Nature doesn't need any more of this kind of help.  Go back to dirty air or pay the consequences. 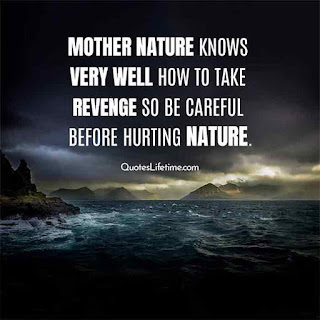 Posted by Sarah Schrumpf-Deacon at 5:32 PM