I could see the flowers from across the room. The arrangement was lovely to say the least.  The colors were bright and inviting, in no way like so many monochromatic decorative arrangements that adorned tables everywhere.  I had this urge to walk over to them, touch them and smell them. It was so rare these days to see arrangements of real flowers, I wanted to compliment the staff in bringing color to an otherwise bland functional area.

"The flowers are lovely," I said to the receptionist.

"Oh, those. They just changed them out yesterday. The previous ones had been there for years and were all dusty," she commented pleasantly.

I had been deceived. . . . .again.  Oh, it wasn't that I was actually angry or even surprised - just - disappointed.  Like so many experiences these days, artificial is somehow preferred over real. Artificial wood. . . Artificial flowers . . . . Artificiall Intelligence.

As a parent I am ever so grateful that Alexa, Siri and countless apps were not available to "help" my children.  They were smart enough to circumvent the rules when it suited them. They did not need any help in that regard.  But like the silk flowers that are now both common and surreal in their use, these examples of artificial intelligence are always artificial and never intelligent.

How AI Corrupted the Study of Science

For older teachers who saw the gradual but invasive creep of micro-chipped technology into school curriculi, there was no missing the lack of problem solving and general comprehension that showed up all to frequently in simple mistakes and quizzical looks when students had no idea what was being conveyed. This wasn't a difference of generational language but an empty spot where life skills and useable knowlede was stored.

As teachers, we had been told time and time again that rote memorization was not needed since the inventon of the internet--that ever question would be answered simply by asking the question.  No one every imagined that the primary information system of the World would be corrupted to the point that it is imposible for many to tell what is truth and what is fiction.

It is this World into which the study of climate change has change the way we do everything and the one that we can no longer trust to produce quality scientific information.

Dealing with a Future of AI

Since the passage of the 2009 Education for Innovation Act under President Barrack Obama, science has become about machinery and testing, not thought and complex problem solving. The lag time in identifying COVID-19 and coming to terms with an acceptable treatment protocol was a clear indication that operating technology will produce the same results as a well educated, practiced brains.

So how do we deal with a public that depends on a device for everyday decisions? That is the scary part of these problem. 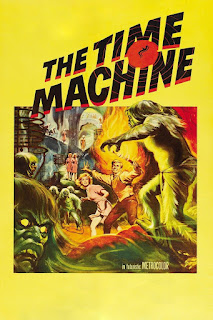 A week or so ago, The Time Machine, a 1960 award winning film adaptation of the H.G. Wells book by the same title, showed up on one of the old movie channels.  It has easily been 50 years since I saw this movie for the first time and I can still remember the impressions that impact how I view technology.  For those who have never seen it or the 2002 version - which is a bit more focused on special effects - it is a tale of what happens when disaster comes to an civilized but unaware population. Dividing into two 'species', for the lack of a better word, one becomes childlike and dependent while the other cruel and driven.  The stronger half keeps the planet artificially vibrant while the other live ignorant that they will at some point become slaves to the other.

As society passes its 75th year as part of the computer age, the machine we considered a great invention is showing signs of tarnish and malfunction.  If it hasn't already done so,the likelihood that humans will soon find that they have misled themselves is very real. By putting too much faith in a computer that can neither think nor feel and becoming tethered to multiple devices, our experts have become the mindless children of future time.

Like the flowers at the beginning of this post, knowledge that is mechanical and crafted out of predictable patterns cannot take the place of honest ingenuity and reason.  The sad part is that our leaders may be too embarrassed to admit they were duped and continue on a dangerous path out of pride.  Will the rest of us be able to stand up to that blind authority or will we realize the mistake in time to save ourselves?

Posted by Sarah Schrumpf-Deacon at 2:05 PM No comments: