If the quote "Let Them Eat Cake!" is not part of your high school classwork memories, then the similarity of Bill Gates' latest statement supporting climate change infrastructure might be neither familiar in tone nor currently relevant.  To the climate change investor, however, it may be a lesson from the past that foretells of financial ruin for the wealthy and more practical focus on the global economy.

"Let Them Eat Cake" in History

One version of Marie Antoinette's historic gaffe to the starving French people follows a story something like this. Whether it is accurate or not, that is left to the historians.

Insulated from much of daily life in the1700s, the French royal family, lived and ruled from the security of the Chateau Versailles, a community centered on life at Court.   Issues such as illness, inflation and famine were something to be tolerated as part of life. It was not until the reign of the young Louis XVI that royal wishes shifted the focus away from a working economy to one focused largely on the trappings of the Baroque Period.

For Marie, wife of Louis XVI, the loud and violent protests that surrounded her home and carriage seemed confusing and inappropriate.  When asked why they were protesting, and then learning they had no bread to eat, she simply stated the obvious, "Let them eat cake!"  She had no understanding of how crop failure translated into a lack of flour which then logically meant a lack of bread. Because she had both bread and cake, she naively assumed, all people had the same options.

Her ignorance of this situation would go down as one trigger for the French Revolution  (1789-1799), with her being beheaded in October of 1793 as a result.

Infrastructure Without A Purpose 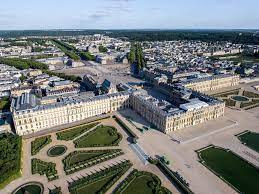 Like Louis XVI, Gates is a wealthy man and can direct funds to multiple projects. The young King would spend the 20 years prior to the French Revolution turning a well appointed chateau and hunting lodge into the Palace we now associate with the Versailles name.  Like the 2,300 room palace and grounds which were never again used as anything more than a testament to the fall of the privileged, Gates' desire to create a framework of unnecessary and expensive food production could bring him and others to financial ruin.

One version of the businessman's message, "Let Them Eat Bugs!", was recently published by Cheryl K. Chumley, in the Washington Times. The subscription-only article apparently explains why a wealthy man would gobble up North Dakota farmland which until two weeks ago was protected by law. Is the article for or against such waste of resources? Who knows but this post is adamantly against such funding, especially by taxpayers because nature will always adapt faster than humans.

What the Data Doesn't Tell You?

Without getting into too much detain, here are a few missed factors that will cause the "Let Them Eat Bugs!" to fail

The bottom line is that Gates is, like Louis XVI, acting on his vision of a World that has no purpose other than to be historically remembered.

Posted by Sarah Schrumpf-Deacon at 11:27 PM