In 1970, I could have cared less about the Environmental Protection Agency, smog, Richard Nixon or even the Vietnam War. What I do remember of those late sixties and early seventies is the onset of family health issues which had never bothered any of us before.

So when I began researching the nagging health issues that still surprise me some fifty years later, it was not a huge stretch of the imagination to realize that there might be a strong, identifiable link between the haphazard and California driven environmental movement and public health crisis that we now claim is caused by something called "Climate Change".

A year ago last week, I published a small, non-fiction book that explained the many reasons why the EPA had caused the very condition it had been created to avoid. I still believe that the EPA and particularly the Obama/Biden push to force green energy on the planet, is the primary cause of our decline in wellness, growing mental health issues, violence and erratic weather patterns. More importantly, those statements can be proven.

As the world relies more heavily on coal, there should be a slow decrease in diabetes, particularly in younger people.  Mental health should improve, and suicide rates will hopefully drop off. All because sulfur and nitrogen were labeled pollutants and EPA power allowed them to be removed from an atmosphere that relies on them.

Read for yourself how the influence of one President and one state doomed the planet to experience fifty years of poor health and ever increasing stress. With the Supreme Court's decision there is no a chance to turn back the clock and restore health the  planet as a whole. 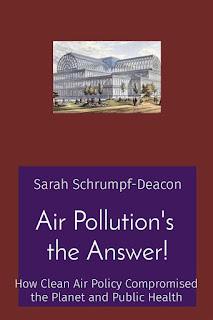 Posted by Sarah Schrumpf-Deacon at 8:00 PM