At best, this country's media is naive. At worse, it approaches the level of being uneducated, if not ignorant in its understanding of how our country works. This poses a level of danger that cannot be gauged as politicians make decisions based on headlines rather than fact.

Until the media starts fact checking itself, climate change will never be remediated with reporters publishing hype over reality.

The recent story about about 2,000 dead cattle across Kansas was picked up from the Associated Press, a news agency that has been instrumental in getting information to smaller and more rural areas for well over a hundred years.  But, is what they printed an accurate representation of a climate change issue? Maybe not.

Kansas is one of the largest cattle producing states in the country with a reported 24 million cattle on the hoof at any time.  Doing a little math, that means that the 2,000 dead cattle amount to less than 1/100th of a percent of all cattle in Kansas. Not such a bit number now is it? 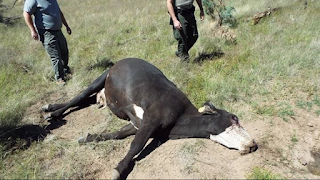 Furthermore, the question no one seems to ask is How many cattle are lost daily in commercial operations?  Yes, cattle die every single day in farming--even the days with 70 degree temperatures and balmy breezes.

According to Drover.com, death losses in commercially produced cattle average about 4 percent a year, with the understanding that individual operations can go as high has 10 percent if they are managed poorly.  So what is the average number of cattle that die each day in Kansas based on the 4 percent estimate?  Some where in the neighborhood of 2600 head a day.

Doesn't that sober the idea of deadly climate change killing 2000 cattle over a four day heat wave? Not so big a number now, is it?

Like all businesses, farming has insurance for some things but the chances of making a claim are pretty slim unless its unusual weather or accident.  By filing those 2000 dead cattle as related to heat stress, farmers have a greater chance to get a return on a dead animal. Haven't we all looked at insurance in this manner?

So now, is this about climate change or just about an industry that is doing its best to deal with Mother Nature and make a profit?  Farming is a business just like all others with losses that can sometimes be insured.

As for the impact on the food shortage, this headline did nothing but encouraged meat packers and grocery stores to increase their prices. The actual impact of these deaths is well within the range of normal losses but here is a bit more information about beef availability if you need more proof.

According to the USDA Cattle report for March 2022, 3.01 million cattle were slaughtered during the month.  Even assuming that all 2000 dead cattle were slaughter weight and ready to be shipped (and that is a stretch), that amounts to only 6/100ths of one percent of all cattle slaughtered during a SINGLE month.  The impact on the yearly beef supply is to small to even consider relevant. But the publicity value of these erroneous reports are invaluable as ways to justify increasing costs as all levels of production except on the farm.

Not only at the mercy of an uneducated information system (social media, 24/7 news programming and commercial marketing),this country has a President who has demonstrated little understanding of market economics and food production. Add to that scary thought the knowledge that Congress, the US Cabinet, EPA, FDA and state and local governments are as clueless of this issue, the potential for disaster is far greater than a baby formula shortage. How long will other country's rescue us before they realize America is not what it claims to be.

Voting for Intelligence not Party

As we go into the 2022 mid-term elections, are we going to vote more clueless people into office because they have a D or an R beside their names? Are we going to put our future into the hands of people who are absolved by law of any wrong doing without regard to the reason? It's time Americans considered their options more carefully than their party affiliation.

As for the Media, it appears that no agency is above fabricating stories based on political value and poll numbers.  Climate change is not killing this country.  Ignorance and poor leadership are.  That is the story reporters should be telling.

Posted by Sarah Schrumpf-Deacon at 9:56 AM