Nature Doesn't Have a Climate Change Problem:: The Blessings of Catastrophic Weather

You know, people? We might just have this climate change thing all wrong.

Even though many of us have planted trees, gone plant based diet and condemned the oil companies for bringing this crisis to our door steps, Planet Earth is STILL racked by catastrophic weather, temperature extremes and general human inconvenience.

Wait, did I just say that this was about human inconvenience? No that can't be right. There has to be something wrong with Nature. It cannot be all about us, can it?

Our Concerns are not Nature's Concerns

Unfortunately, that is the way it looks and no one wants to admit that Nature has this firmly under control. That WE, the most advanced of all species are the ones who refuse to live equitably with all other species is just not possible. WE want to take care of the environment and are willing to spend trillions of dollars to create a predictably boring and risk free climate that lets all creatures live as comfortably as we do. That we do all this at the expense of poor nations and those of modest means should be applauded, not discounted. Why doesn't Nature seem to appreciate all that WE are doing for it? 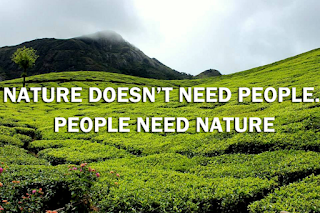 Maybe, its just that Nature doesn't need our help. Plain and Simple.

The Natural Order is. . Well . . Natural

Come on! Think about it. Isn't the industrialized, society-based life style that is forced on third world countries and considered a mark of success a bit over the top. It almost makes the term "high maintenance" seem humble when we compare our homes to a beaver's dam or minnow's pond. And yet, we fully expect Nature to behave and not cause population centers any difficulties.  Hmmm?  How truly civilized of us.

Could Nature have a completely automated, highly responsive system at its disposal to reset an ecosystem? Faced with clear environmental benefits after each event, we choose to downplay their presence because they clash with our image of environmental health.

As hard as it might be to swallow, Nature may be saving itself from those who are SAVING THE PLANET. when it sends extreme weather to counteract our clumsy methods of planetary protection.

Like all good management systems, fail safe measures kick in to keep the operation from imploding. Why, with all we know about the planet, would we assume extreme weather patterns are without a purpose? There we go, thinking we are in control again.

How might it work do you ask? Consider these possibilities

Triggered by low levels of emissions commonly found in animal habitats (dirt, CO2, methane, ammonia and rotten egg gas), drought assumes low animal populations and re-allocates water to where it is needed. This becomes a time of rejuvenation for plants by encouraging them to self-prune, broaden root systems and produce hardy seeds that may remain for a decade or more. Tall grasses which are not preferred by grazers die out to be replaced by clovers and fescue which are hardier. The shrinking of the dry ground opens up ways to better aerate the soil and incorporate depleted nutrients.

Partnered with drought, wildfires specifically target heavy vegetation that is older or overgrown. Triggered by higher oxygen levels and the presence of flammable gases linked to slowly rotting ground cover, spontaneous combustion is possible when humidity levels are low. Purposefully realigning the balance between animals and vegetation, within weeks, grasses and small trees welcome a larger variety of species back to the area.  Unlike forests which have been selectively harvested over centuries to maintain their ecological balance, unused forests have an 80-100 year lifespan and destruction by fire is a typical method of rebirth.

Composed of the same gases which are considered air pollution by climate advocates, volcanic eruptions give birth to new land masses but also spew millions of cubic meters of essential gases and dirt into the atmosphere.  Located typically near large bodies of water, this smoke and ash attract water vapor that is then transported countless miles and deposited by rain. Best used to provide nitrogen and sulfur to non-farming areas, volcanoes perform the same environmental service as burning fossil fuels did for thousands of years.

In truth, any major rain event that draws moisture from a large body of water serves the same purpose--to clean up and sanitize the ground. While the aftermath of a hurricane and its flooding seem anything but clean, water than soaks into the ground is purified and drains into the Earth's underground aquifer.  As that water moves down, it takes with it trace minerals and bacteria which help boost the immune sytem of plants while releasing oxygen into the soil.  While its methods may be harsh, wildlife depend on the recycling of these trace minerals which are no longer found in a pollution free atmosphere.

Tornadoes, earthquakes, extreme temperatures and blizzards each have their own purpose but deal with smaller more regional problems.

Can We Admit WE Goofed?

Even if only part of this concept is true (but all these methods hold with chemical and biological science), can the SAVE THE PLANET mindset stop repairing nature long enough to see that it may be causing extreme weather, not preventing it?

For all our efforts, our focus on climate change, nature has never been the focus. Our thoughts, concerns and efforts been about how we see the world.  The fact we used more resources and give less back to the environment than any other species seems to escape consideration in solving climate change.

Air Pollution's the Answer!  if we want to support Nature.

Posted by Sarah Schrumpf-Deacon at 11:37 AM