Climate Change 2022: Why CO2 levels are NOT Increasing But Science Thinks They Have (A FACS Teacher Explains) 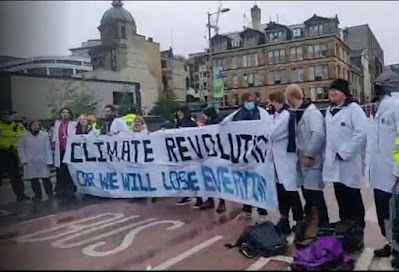 It has been a strange week for the discussion of climate change.The federal government reversed course to increase domestic oil and gas production. The President authorized higher levels of ethanol in vehicle fuels and he returned to an Obama era pledge to increase conservation initiatives that would set aside even more land for non-commercial uses. But it was the  global protests of idealistic scientists that seemed most out of place in the lead up to Earth Day 2022. Generally armed with irrefutable fact, that science must resort to the emotional protest model clearly shows that their theory and plan for the future is off kilter.

Can a retired farmer and FACS teacher from rural Virginia show our protesters from Scientist Rebellion  that greenhouse gas theory only lives on the pages of spreadsheets and scientific reports. More troublesome is how does one explain that for all their dedication and passion for the subject, scientific findings have little more backing them than a gypsy's crystal ball in a roadside carnival. The challenge is on even with the potential for hurt feelings of those who work daily supporting a global vision of climate change for which there is in no physical proof.

Why Worry About Greenhouse Gases

Greenhouse gas is a loose term used to describe any gas that includes carbon or is on a list of restricted gases published by federal or state environmental agencies. What most people do not realize about greenhouse gases is that they are the foundation of the "Circle of Life" and have been a part of the Earth since the beginning of time. Why they are considered bad is the belief by some that they are responsible for warmer temperatures and erratic weather. Neither is true.

In FACS (Family and Consumer Science), math is used more often than you might think even if it seems basic. Ratios (comparing one small number to a much larger number) is used in recipes, planning diets, figuring retail discounts and other ways such as pattern alterations and budgets. The problem is they can be tricky, particularly when using computer. The wrong formula in the wrong column can send data into a place that is truly fictional  Unfortunately, that is what appears to have happened here and why greenhouse gas theory is fundamentally flawed.

Climate advocates believe that the ratio of carbon gases is getting larger and that it is dangerous for the planet. Perhaps the question needs to be were the right numbers added, subtracted, multiplied and divided in the right order and in the right way to give a factual answer.

It's Takes a Bag of Jelly Beans to Make This Simple

Understanding the atmosphere is easier when you have something real to compare it to. Called an object lesson, such explanations are used frequently in public schools. Try it yourself.

Start with 100 multi-colored jelly beans of which 5 are black. These will represent our dastardly greenhouse gases at 5% of the atmosphere.  Commonly used as a base line for what a normal or safe level of CO2 is, modern scientists may not realize how much the atmosphere has changed in the last 70 years.

For this experiment, eat 10 green ones first (hospitals take out oxygen for medical purposes). Next, pretend a friend comes by and takes a handful (14) of mixed colors without telling you (representing EPA restrictions of multiple gases). You drop three red ones which the dog eats (these are nitrogen used in healthcare for preserving tissue, sperm and donor eggs) . Notice the Black ones are still in the bowl. You may think that nothing has happened to these and math implies that they have increased to  7.3% of the remaining jelly beans. The truth is something far more environmentally magical.

Without being noticed, a half dozen people came by and either took a black bean or left one.  This is how CO2 works in nature. For every molecule that a plant uses, an animal gives off one to keep a stead supply available for all plants. Isn't Nature AMAZING!

The Curse of Poor Math Skills on Modern Science

For all the wonderful tasks that computers do, taking math equations out of the hands of scientists has to be a curse.  Only with paper and pencil (or chalkboard and chalk) is it possible to allow others to check our math and correct mistakes.

Infecting every part of research (economic, medical, and environmental), errors in math should be considered the single most common factor that impacts success. If those who make up the Scientist Rebellion group can prove their findings without using a computer or satellite image (just as I have done here) then they will gain the support they so desperately want.

Other Tidbits to Know

1.  Carbon dioxide is common at ground level because it is heavier than other gases. Besides how are plants suppose to use CO2 if it doesn't stay where the plants are. ????

3. Carbon dioxide is more common in urban areas, not so much in rural areas. If this is a problem, than it is an urban problem not a global one.

4. Efforts to "capture" carbon and remove it could have long lasting negative effects on plant life. Some manufacturing may see it as a more environmentally friendly replacement for coal.  In reality, removing carbon from the atmosphere could could cause forests to die if they are located too close to these carbon capture operations.

5. Solar and wind power will not reduce the amount of carbon dioxide in the air since most of it comes from living beings.

6. While burning fossil fuels does give off CO2, it also gives off other gases which are essential to health plant growth in the wild. The only way to make up for those gases is to physically fertilize wildlife habitats with products--- wait for it--- that come from fossil fuels.  Doesn't make sense does it?

Posted by Sarah Schrumpf-Deacon at 12:06 PM