Climate Change Reailty Check:: If We Were Meant to be Solar Based, Wouldn't Man Be GREEN!! (Commentary) 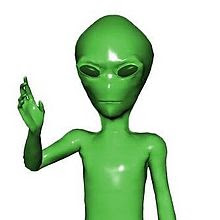 Generally, it isn't smart to mix factual science with faith-based beliefs but as industrialized countries embark on a dozen or more radical solar, carbon-capturing and wind energy initiatives that are untested at best, one wonders why modern science is so determined to fiddle with a pretty good situation. Doesn't it seem likely that if mankind were meant to live off the sun's energy, he would have been made green from the beginning? Regardless of who you believe is responsible for iits beginning--a Spiritual Being, alien colonists from another planet or Darwin's Theory of Evolution, what right does a small group of extremists have to dictate changes to a planet that is both unique and functional.

Perhaps a bit of perspective is in order to remind environmental purists how homo-sapiens already fare in the natural World.  Will they be embarrassed by their attitude or will they feel even more entitled to living conditions that prove how weak a species man really is?

1.  Man is the only species that does not live in the home Nature created for him.

As glorious as cultural architecture is, it is in no way similar to the forests, caves or water that support the rest of the World's beings.  Even the tents of nomads and shanties of refugees offer more shelter than is provided for animals on the plains or fish in the sea.  What right do we have to expect climate-controlled accommodations when other life forms go it alone? So what if the Earth is a little hotter than it was fifty years ago. All ohter species manage, why can't man?

2. Man is the only species that needs an energy source to survive.

Certainly, our opposable thumbs and brains helped in letting our species thrive but it is fire that was the big difference in ancient man's success.  By all other accounts, man had little to keep him from  becoming extinct long ago. Have any of our climate advocates every thought that the smoke and dirt from 5,000 thousand years of fires provided something more than creature comforts.  Probably not.  While people now complain about the acrid smell, burning was nature's method of recycling resources equally across all life forms.

3.  Man is the only species that creates trash and will not allow it to decompose or degrade.

Until recently, burning trash at night was a common and acceptable practice.  One interesting point in this regard is that paper is made of organic cellulose. If our country burned its paper instead of recycling it, approximately 60% of its weight would be release as water vapor (1 pound to 10 oz of water) Unfortunately, California and other drought hit areas choose to believe smoke is dangerous. InS real life, smoke creates clouds that carry rain and shield the land from the sun. By not burning trash, we make our environment dryer and hotter. Removing all the CO2 in the World will not make the temperature go down without clouds in the sky.

4. Man is the only species that feels he has to "work" at something other than finding food, sleeping, protecting himself against harm and tending children and family members.

As the stock market prepares for a recession, people around the World are concerned about a global slow down.  Do people really have to work as much and as hard as they do to provide the basics or is this a mindset forced upon us for the benefit of the elite?

5. Man is the only species that expects its food to be planted, grown, harvested, transported, prepared and delivered to him.

Even in the most rural of communities in Southeast Asia, Africa and South America, people who live in cities expect food to come to them.  Like male lions they assume food is available for the asking without regard for what it takes to provide it.  A global economy takes food for granted and urban mindsets recommend plant based diets without knowing anything about nutrrition..  Moreover, as the air becomes cleaner, it loses its ability to be the first primary source of nutrients for the poor and disadvantaged.  The nitrogen and sulfur that is now restricted per EPA guidelines can no longer support bodily functions for any animal.  Not surprising, the pharmaceutical companies have made billions by providing those same compounds as drugs and supplements, fertilizers and such.

It's All About Balance

If you haven't figured it out by now, the balance between life forms that produce food (aka, energy) and those which use it is the reason this worked well for thousands of yearsl. Human beings are clearly users in this system. The species refusal to burn organic fuels (trees, paper, oil, coal, blubber, peat etc.) and release the chemical bonds of elements needed for life is the cause of climate change.

By trying to be a producer of energy, we abandoned our job as part of nature and nature has had to resort to all kinds of catastrophic weather events to tear down what man wants to build.   Without fire, the atmosphere lacks the compounds that keeps all life happy and healthy.  By naively proclaiming all smoke harmful, environmental advocates handicapped nature's system of providing health to all creatures.

If we want to end climate change, it will require us to abandon clean energy and use moderation to give Nature what it needs to make clouds and bring rain and shade. Otherwise, it will be one HOT, HOT summer.

Posted by Sarah Schrumpf-Deacon at 11:18 PM