Climate Change 2022: Let's Review What Has Happened and Where We Now Stand (A FACS Teacher Explains)

Two weeks ago, there were signs that World leaders had learned the importance of restraint concerning climate change initiatives.  Now as Bill Gates, former Secretary John Kerry (now US Climate Change Envoy) and other hard line climate scientists attempt to whip the World into a climate-focused frenzy ahead of the UN Climate Change Conference (COP27) in October, the dialogue is regrettably similar.  That leaves only one thing to do. As any good teacher does from time to time, it's time to review what we have learned and what we have not yet mastered.

Unlike other subjects which students forget as soon as they pass the test, Family and Consumer Science is about learning for a lifetime.  After all, life is one LONG test, is it not?

1. In 2021, President Joe Biden proposed a HUGE spending package which would have implemented several infrastructure and social programs related to climate change. While the larger package failed in December, Biden has been busy putting some of his environmental programs into place by drawing from other departments.  While money was already budgeted to fund such military actions as those in Ukraine, Congress chose to use that event to pass a smaller spending package that not only funded $13 billion for Ukraine by also opened the door to additional climate change projects. In late May, Biden will restart 1970s era environmental guidelines for federally funded infrastructure projects. Those projects may now be required to adhere to unproven and, in most cases, impossible to measure carbon tracking methods. Clearly designed to look good on paper for the United Nations and our European allies these tracking methods do not appear to be in use by the Federal government for any of its own programs. Clearly expecting the American people to "do as I say, not as I do" these initiatives have the potential to add further fuel to the inflation fire.  Based on statements by Biden, himself, Kerry and Gates, the current concern is NOT the health or welfare of the global population but the status of its economy. Biden has repeatedly voiced expectations for Americans to pay the price for aid given to allies which are far more well-off than we are.   Mr. President, you are not JFK and for 60 years, the American people have stepped up to support those in need only to be expected to give more.

2.  In early April, 2022, the U.N. Secretary General Antonio Guterres went off the rails in a statement claiming that World leaders were disregarding the eminent danger to the planet.  Again, the report he cited gives a conclusion but does not back up its statements with logical, verifiable fact. As a member of the U.N. Security Council, the US has an apparent obligation to go along with the report even if it is faulty and causes is own people to be harmed in the process.

3. Following the U.N.'s emotional stand approximately 1000 scientists of unknown background protested for climate change solutions.  In lock step with the narrow-focused carbon gas theory mindsets, these protesters resorted to emotional pleas instead of fact.  At the heart of the protest, one young person expressed the opinion that scientists deserve to be heeded on face value alone and not provide physical proof of their findings.

4.  In March/April, several media outlets and government agencies sent out reports of catastrophic changes at the poles and along coast lines.  The reports were so erroneous that they were easily debunked by simple scientific explanation.  It appears that those working in the colder regions of the planet have difficulty recognizing what is and is not a freezing temperature on the Fahrenheit and Celsius scales.  Rest assured that at all times throughout the forty years of climate change concern, the polar ice caps have never been in danger of being above freezing.  In similar fashion, the  long history of measuring sea level by how far the tide comes in, was at the heart of this scientific folly. Scientists' use of computers for modeling could not compute the ever changing forces of gravity, hydraulics, erosion and planet rotation. What was reported as oceans rising was little more than the natural action of erosion on the beaches which varies greatly from place to place and day to day.

5. Recently, The Atlantic and The Guardian have posted well written articles highlighting the weaknesses in the knowledge base of our scientific community and lack of basic understanding of how the environment works (so much for the impact of STEM funding) as well as the questionable use of closed research studies to gain status and funding for programs.  Both expressed important findings regarding the unreliable nature of the conclusions drawn in the climate change fight. Mainstream media has also become more cautious in how they report scientific data choosing to look at solutions rather than focus on cause.

For all practical purposes, the World is in the same position it was a year ago.

Regardless of the Iffy nature of current climate change information, the countries of the G7 still hold fast to the idea of carbon-gas being to blame for the apparent warming of the Earth. Very much focused on solutions that can be marketed, these countries ignore the climate studies that disagree with their assumptions. 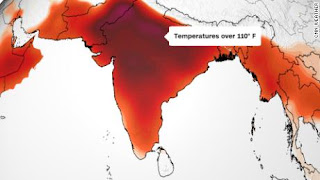 India, which has experienced extreme weather for some time, has developed studies which are contradictory to the findings of  the U.N. report.  While every one agrees that climate change exists, what causes or defines climate change is still up for debate. Like the author of Air Pollution's the Answer! How Clean Air Policy Compromise the Plane and Public Health, India tends to side with other causes for the clear skies which now allow the sun to bake the country.

Isn't it interesting that the countries which now have mild weather seem the most determined to remove CO2 gases from the atmosphere while others which have long endured periods of drought see clear skies and little rain as a far more concerning situation.

Unfortunately as long as industrialized nations are looking for a way to make money off of climate change, there will be no real solution for any of planet Earth's citizens.

Posted by Sarah Schrumpf-Deacon at 12:24 PM