Climate Change 2022: The Science and Benefit of Burning Trash

** As the Federal Government gets ready to lower the boom on companies with massive environmental regulations that are not used by the government themselves or shown to be anything more than computer generated data, please remember that the EPA can control local and state governments but not private individuals.  Banning gas stoves is just such a move to intimidate average citizens to spend (and increase inflation) based on an environmental policy that is likely the cause of poor public health and erratic weather.  Burning trash can help prove these policies are based on opinion rather than fact.  BUT, please do not do anything against local and state ordinances.

As we go into another summer that is predicted to be hotter and more dangerous than the last, its time to considered the old ways of maintaining environmental health rather than accepting the unproductive, expensive methods of carbon capture and global recycling that World leaders seem to prefer. One example of environmentally based waste management is to burn trash as it is created. In fact, there is a chance that burning trash could quickly and effectively deal with global warming in a matter of months instead of decades.

Wait, before you even think it, you are right. Some regulatory agencies might take exception to individuals burning their own trash, and there are neighbors who might complain. Finally, a dozen medical experts will claim we are endangering millions of people with quack science,  In the explanations below, you will see why burning trash was used for so many years and why it could actually improve the health of the global population.

In a post-COVID, Hepatitis, MonkeyPox, Avian Flue, etc. world, the idea that masks, chemical disinfection and social distancing can be as effective at PREVENTING outbreaks as high heat has not been proven over time. Discarded items such as tissues, used masks, and paper and plastic utensils as well as leftover food can carry bacteria and viruses to others through trash disposal systems, even giving some germs a safe haven for replication and adaptation. Burning is cheap and highly effective and was so common that many urban buildings were equipped with basement trash incinerators that quietly and systematically took care of the problem with little or not disruption.

Ironically, as the healthcare and safety industries adopt strict regulations for pollutants, agencies such as the FDA, EPA and CDC ignore the fact that those same substances are common in our medicines and household cleaning products,  Understandably, the pubic has a hard time accepting that moderate exposure to chlorine, sulfur, ammonia and other natural disinfectants is safe and has health benefits for not only humans but for other species as well.  Starting with water vapor (steam) which comes off any fire  (500 degrees+), air that warms to at least 170 degrees F will be free of contaminants.  Not only good for humans, such disinfection improves the environment for all  creatures in the animal kingdom.  As for the rest of these gases, they typically form a series of compounds which are lighter than air.  In the upper atmosphere, they combine with water vapor to produce rain that deposits valuable nutrients back into the soil.

For those who are intimidated by chemistry, think of trash as a very complex puzzle with thousands of tiny pieces and one rule--you can only use a piece once.  By covering over trash to keep it from smelling, we force bacteria to do the work of a fire in a much slower and drawn out process.  The bacteria use up the oxygen in the trash leaving hydrogen sulfide and methane as the primary by-products. However, if trash is burned, the oxygen partners up with the hydrogen and you get water vapor. Of course, there is some dirt and other stuff but these components are removed from the air with every passing rain shower. Which would you rather have water or smelly gases that no one likes?

Somewhere along the line as climate change fears grew, science confused air pollution with rain clouds. Both look dark and both make it a gloomy day. The difference is that air pollution is based on gases that only occur when chemicals are burned in an unnatural way, such as memory foam in a house fire. Another common pollutant was lead oxide which occured when lead was added to gasoline after it was refined. Thankfully, leaded gasoline was banned in 1996 but our impressions of dark clouds being automatically harmful has not changed.  Fires from natural fuel sources have white or light grey smoke while chemical fires have black smoke.  Black smoke during a wildfire may not be a result of the trees but the burning of chemicals in homes or the chemical fire retardants used by firefighters.

The point is burning small amounts of trash at a time, produces light colored smoke that collects higher up in the atmosphere and forms clouds which attract rain. The darker the cloud the more rain in it.

One of the best reasons to burn trash is the thousands of acres taken up by land fills and dump sites that could be used for other purposes.  Recycling glass and metal containers along with burning paper products could substantially decrease the area needed for disposal. It would be much less dangerous for wildlife and not morph into an uneven landscape as trash decomposes in an uneven fashion.

6.  Burning saves and can even creates energy.

Again, if chemistry is not your thing, that's fine but some scientists misinterpret information. An example, while plastic drink bottles, clothing and disposable tableware are all made from crude oil, the process of making them in the first place removes all the bad heavy metals and leaves a solid burnable compound.  Shredded plastic could provide a viable energy source for manufacturing as a substitute for crude oil or methane. How many seabirds, fish or other forms of wildlife could have been saved had science and politicians not over-reacted to the plastic craze?

As for saving energy, the global recycling market uses far more energy than it saves. The United States sends tons of recycled materials to other countries for disposal. Using trash as an energy source could cut our dependency on alternative energy considerable.  While alternative energies like ethanol, solar and wind power are good in theory, they are also finicky and weather dependent. Trash, however, is a steady supply that is always as close as your back yard. 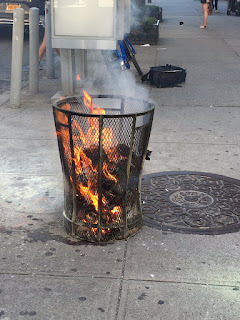 If you decide to support the environment by burning trash, there is a right and a wrong way to do it.  Here are some guidelines.

Capturing carbon may be great for the economy but it will mean a hotter and dry summer for us all. Burning trash may not be socially acceptable at this point in time but it is far more environmentally friendly than any Clean Air Policy currently on the books.

Posted by Sarah Schrumpf-Deacon at 12:15 PM