It's time to give the Climate Change topic a rest for a bit and look to something else. This interesting development popped up on my news app this morning.

Before explaining the news, maybe I should explain a bit about my attitude toward what is now referred to as "Social Issues".  This term is a catch all for anything any one wants to fuss about. But fussing in and of itself it unproductive.  I am an advocate for quiet, peaceful, individual (no mob protests for this girl) and active methods of speaking out against a government that is driven more by elections than citizen needs.  There is but one caveat--the debate, no matter how heated, needs to be respectful and civil. Investing in charitable causes, writing letters to the editor based on solid points (and blogs) about specific issues and supporting those businesses that seem to jive with a personal value system are all part of a good healthy way to protest an out of control government, That said, Arizona voters may have come up with an even better way of drawing attention to the dysfunction of government and that is to leave both parties and register as independents.  What a wonderful way to get politicians' attention! 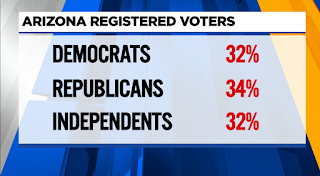 While I am not able to speak to the accuracy of the figures in the image above (statistical research can be easily manipulated), it seems Arizona voters have decided to make their attitudes with both parties clear and it is a message that the country will be watching.

In today's national elections, there are only four states that really matter--California, Texas, New York and Florida.  This is based on their populations and none are considered rural or disadvantaged states.  In the same way as politicians go after the larger states, it is the cities that are the focus of most local elections. Rural communities and their lower income populations are not considered unless the state is a "swing" state and could go either way.

Arizona may have figured out a way to get the federal government to pay attention to it, and it may be a good idea for all voters in smaller states to consider adopting an independent political stand for the foreseeable future.

Why? Because it sends a message that means rural and disadvantaged communities can no longer be taken for granted by either party. Often described with disdain because they do not vote for an agenda which is financially unsustainable and wasteful, rural communities are far more independent in their thinking than journalists and politicians realize. Even though rural America is where most of this country's food is produced, and most of its raw materials for manufacturing come from, political parties typically think rural communities are still in a Great Depression mindset--any job, any opportunity, any service is better than nothing. Perhaps its time for that mindset to change and stand up for rural rights. Other reasons to consider becoming an independent include these questions:

Politicians work hard but they work hard at being a politician. Leadership is something that is very different and missing these days.  Maybe it is up to individual citizens to take a small, quiet, active but respectful step to tell politicians it's time to be leaders.

Congratulations Arizona for breaking ground on a trend that I hope will become a nationwide movement.  Good Job!

Posted by Sarah Schrumpf-Deacon at 1:36 PM