If Humans Were Ships: A Lesson in Positive Thinking 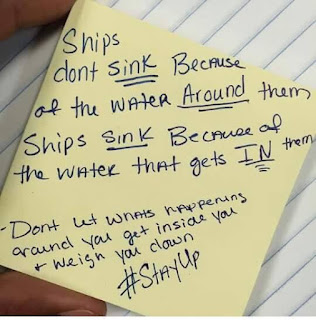 ****Yet another post that has been waiting its turn in my draft folder.
For several years--to be honest since the late 1960s--the US has had this mindset that if you think something will turn out in a positive way, then it will do so. Some may pray for it. Others wish on a star or do good work so karma smiles on them. Even others write in journals about all the things they want to accomplish. But, is it as simple as thinking positively? Can mankind simply float above the bad and not let it inside? More importantly, should mankind ignore and resist the bad in this world but feel comfortable allowing it to  support society as they #StayUp?
My first experience with the topic of Positive Thinking came in my teen years through a Presbyterian minister by the name of Norman Vincent Peale.  His message, written in his book: The Power of Positive Thinking, was so uplifting that, from the very conservative viewpoint of the Presbyterian Church, he was considered a "cult".  And yet, what I remember was a message of  of self-improvement and action, not blind optimism, marketed guilt or self-recrimination.
The image posted above came from Facebook and is NOT a Peale quote. It was shared by one of the few people I have accepted as a Facebook "friend". I care a great deal about this person and consider her a true friend. But what alarmed me about this quote and her use of it was the air of isolation and separation that came with it. Too often, those who regularly share such quotes miss how off-putting they can be to others who are looking for a real human connection.  Could it be that Twitter, Instagram and Facebook have replaced quality human interactions and created a population that would rather rise above injustice instead of developing relationships that remove it from the world?
Looking at what would happen if humans were ships might be eye-opening.
Like people, each ship is unique - canoes look nothing like clippers and aircraft carriers greatly overshadow the lowly rowboat.  In the same way, each vessel has a different purpose.  The canoe is not effective on larger bodies of water and the aircraft carrier would serve little practical purpose if taken for a lazy afternoon of fishing. Maybe a bit more tongue-in-cheek of a description than called for but, people who toss out "positivity" may not always look past the emotional impact of their statements to see the flaws in them. Like boats, people come in all shapes and sizes. They also have different needs in order to be functional.
Water is not the only thing that allows a boat to float. Before a boat can float, it has to be built. In this regard, shipbuilding and becoming an adult have many similarities.
For thousands of years, shipbuilding with wood was an art that included attention to detail, a wise choice of materials and life-long maintenance. Positive outcomes came from hard work and concentration not positive thinking alone.  Like parents, teachers, coaches and the media who support children with little more than dreams and good feelings, boats that are built with poor materials and a lack of attention fail to perform well.  Positive thinking is not enough to keep a poorly constructed boat from taking on water. But, social media and popular culture continue to put undo pressure on the young by giving them platitudes rather than skills and strong relationships.  As any shipbuilder knows, a good design requires a vessel to have the strength to handle the pressure put upon it.  It also requires an observant captain and a supportive crew to steer it through a storm.  Does modern culture provide such support for individuals or does society opt to #stayup from what is happening while tossing out emojis, tap-n-go comments and virtual hugs as if they were life preservers?
Today, public impression dictates that news outlets, politicians and celebrities publish socially conscientious podcasts and charitable messages for those in need. In this way, those who make the news appear in-tune with those who financial support them without need for action or commitment. More often than not, their messages promote one race over another, one career as being more valuable then another, children as heroes one minute and victims the next, and mental health as something tragic but left to medication and therapy. Who really benefits from these messages?  Such a question is appropriate particularly when these news makers alienate so many in the process.

ironically, this post will end with three quotes from Normal Vincent Peale. Like so much of what is available on the Internet, many of his quotes have been abridged or handpicked to fit public discourse.  However, if one looks long enough, or has a fifty-year of hard copy of his work, it is possible to see that Peale was not into self-recrimination but advocated a pro-active lifestyle that was not based on rhetoric, protest or legislation.

The first quote was picked to remind us that government cannot legislate positive race relations. The second is a reminder that social awareness initiatives may be sending a message of hopelessness and the last is a reminder that only in Disneyland does "Wishing on a Star" have a happy ending.

“Getting people to like you is merely the other side of liking them.”
– Norman Vincent Peale

“Any fact facing us is not as important as our attitude toward it, for that determines our success or failure. The way you think about a fact may defeat you before you ever do anything about it. You are overcome by the fact because you think you are.”
– Norman Vincent Peale

“Action is a great restorer and builder of confidence. Inaction is not only the result, but the cause, of fear. Perhaps the action you take will be successful; perhaps different action or adjustments will have to follow. But any action is better than no action at all.”
– Norman Vincent Peale

Posted by Sarah Schrumpf-Deacon at 8:55 AM